ICC OFFICIAL RULES FOR THE INTERPRETATION OF TRADE TERMS

The Incoterms rules or International Commercial terms are a series of pre-defined commercial terms published by the International Chamber of Commerce (ICC) widely used in international commercial transactions. A series of three-letter trade terms related to common sales practices, the Incoterms rules are intended primarily to clearly communicate the tasks, costs and risks associated with the transportation and delivery of goods. The Incoterms rules are accepted by governments, legal authorities and practitioners worldwide for the interpretation of most commonly used terms in international trade. They are intended to reduce or remove altogether uncertainties arising from different interpretation of the rules in different countries. First published in 1936, the Incoterms rules have been periodically updated, with the eighth version—Incoterms 2010—having been published on January 1, 2011. "Incoterms" is a registered trademark of the ICC.

2. INCOTERMS AND THE EXPORTER

International Commercial Terms, known as “Incoterms”, are internationally accepted terms defining the responsibilities of exporters and importers in the arrangement of shipments and the transfer of liability involved at various stages of the transaction. Incoterms do not cover ownership or the transfer of title of goods. It is crucial to agree on an Incoterm at the start of a negotiation/ quotation of a sale, as it will affect the costs and responsibilities involved in shipping, insurance and tariffs. The new Incoterms 2010 rules were revised by the International Chamber of Commerce and will become effective January 1, 2011. Four terms were eliminated (DAF, DEQ, DES, DDU) and two were added: Delivered at Place (DAP) and Delivered at Terminal (DAT). The modifications affect obligations, risk transfer, and cost sharing for the seller and buyer, resulting in better clarification and application of the eleven (11) Incoterms, and consistent with the way global trade is actually conducted since the last update in 2000.

In any sales transaction, it is important for the seller and buyer to agree on the terms of sale and know precisely what is included in the sale price. Exporters should choose the Incoterm that works best for their company, but also be prepared to quote on other terms.

Inexperienced exporters may want to use the Incoterm “Ex Works” (EXW), because this term carries the least burden for them. Under EXW, an exporter's responsibility ends at their facility's loading dock, which includes making the goods available for pick up and providing any product information needed for filing the Electronic Export Information (EEI). The importer's agent (i.e. their designated U.S. freight forwarder) will arrange and pay for the pre-carriage, shipping, insurance and any additional costs from the exporter's door. A sale based on the Incoterm “CIF”, on the other hand, requires the exporter to arrange and pay for the pre-carriage, shipping, and insurance to a named port. In this case, the sale price (invoice) includes not only the (C)ost of goods, but also (I)nsurance and (F)reight costs that the importing buyer pays the exporting seller.

When designating the Incoterm on a commercial invoice or a quotation to the buyer, the term should be followed by the city or port of load/discharge, such as “EXW Factory, Richmond, VA” or “CIF Rotterdam”. Using the actual address is better to avoid any confusion or misinterpretation. Communication throughout the entire process is crucial. For example, under Ex Works, the shipper should notify the importer when the goods are ready and after they have been picked up by the importer's selected carrier. The exporter's freight forwarder often provides the vessel and sail date, or air cargo service used, and any ocean bill of lading or airway bill number to keep the parties informed of the arrangements and status of the shipment (even though technically under Ex Works the exporter's responsibility ends at their loading dock).

The most burdensome Incoterm for the exporter is Delivered Duty Paid (DDP), because all arrangements and costs are borne by the exporter, usually with the assistance of agents (freight forwarders and customs house brokers). With DDP, the exporter bears all risks and costs of transportation, including duties and tariffs, until the goods are received by the importer, usually at the importer's factory or warehouse. Since DDP represents the maximum obligation to the seller, it is not recommended for companies that are new-to-export.

During the process of revision, which has taken about two years, ICC has done its best to invite views and responses to successive drafts from a wide ranging spectrum of world traders, represented as these various sectors are on the national committees through which ICC operates. Indeed, it has been gratifying to see that this revision process has attracted far more reaction from users around the world than any of the previous revisions of Incoterms. The result of this dialogue is Incoterms 2000, a version which when compared with Incoterms 1990 may appear to have effected few changes. It is clear, however, that Incoterms now enjoy world wide recognition and ICC has therefore decided to consolidate upon that recognition and avoid change for its own sake. On the other hand, serious efforts have been made to ensure that the wording used in Incoterms 2000 clearly and accurately reflects trade practice. Moreover, substantive changes have been made in two areas:

The 11 Incoterms consist of two groups and are listed below in order of increasing risk/liability to the exporter. Under the revised terms, buyers and sellers are being urged to contract precisely where delivery is made and what charges are covered. This should avoid double-billing of terminal handling charges at the port of discharge. References to “ship's rail” were taken out to clarify that delivery means “on-board” the vessel. Insurance, electronic documentation, and supply chain security are addressed in more detail, and gender-neutral language is now used.

FAS - Free Alongside Ship: Risk passes to buyer, including payment of all transportation and insurance costs, once delivered alongside the ship (realistically at named port terminal) by the seller. The export clearance obligation rests with the seller.

FOB - Free On Board: Risk passes to buyer, including payment of all transportation and insurance costs, once delivered on board the ship by the seller. A step further than FAS.

CFR - Cost and Freight: Seller delivers goods and risk passes to buyer when on board the vessel. Seller arranges and pays cost and freight to the named destination port. A step further than FOB.

CIF - Cost, Insurance and Freight: Risk passes to buyer when delivered on board the ship. Seller arranges and pays cost, freight and insurance to destination port. Adds insurance costs to CFR.

Rules for Any Mode or Modes of Transportation:

EXW - Ex Works: Seller delivers (without loading) the goods at disposal of buyer at seller's premises. Long held as the most preferable term for those new-to-export because it represents the minimum liability to the seller. On these routed transactions, the buyer has limited obligation to provide export information to the seller.

FCA - Free Carrier: Seller delivers the goods to the carrier and may be responsible for clearing the goods for export (filing the EEI). More realistic than EXW because it includes loading at pick-up, which is commonly expected, and sellers are more concerned about export violations.

CPT - Carriage Paid To: Seller delivers goods to the carrier at an agreed place, shifting risk to the buyer, but seller must pay cost of carriage to the named place of destination.

CIP - Carriage and Insurance Paid To: Seller delivers goods to the carrier at an agreed place, shifting risk to the buyer, but seller pays carriage and insurance to the named place of destination.

DAP - Delivered at Place: Seller bears cost, risk and responsibility for goods until made available to buyer at named place of destination. Seller clears goods for export, not import. DAP replaces DAF, DDU. 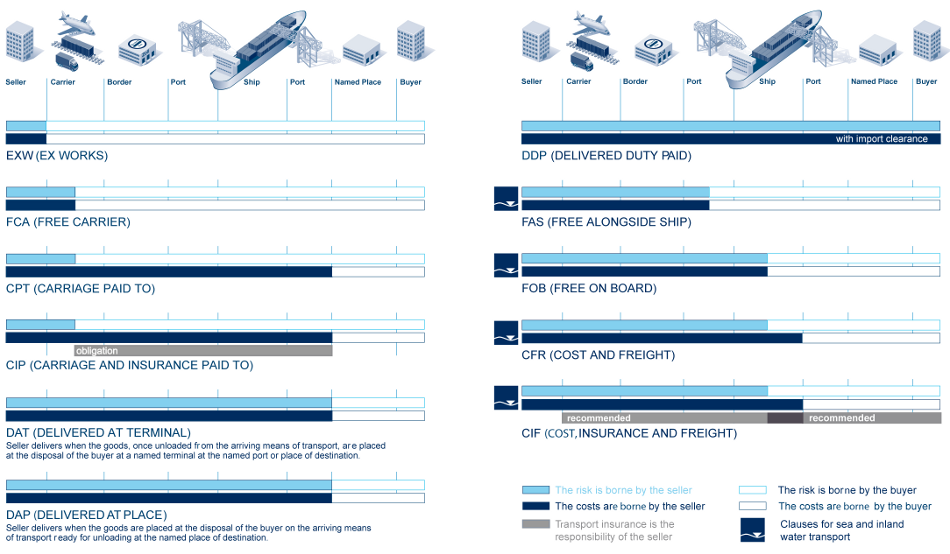